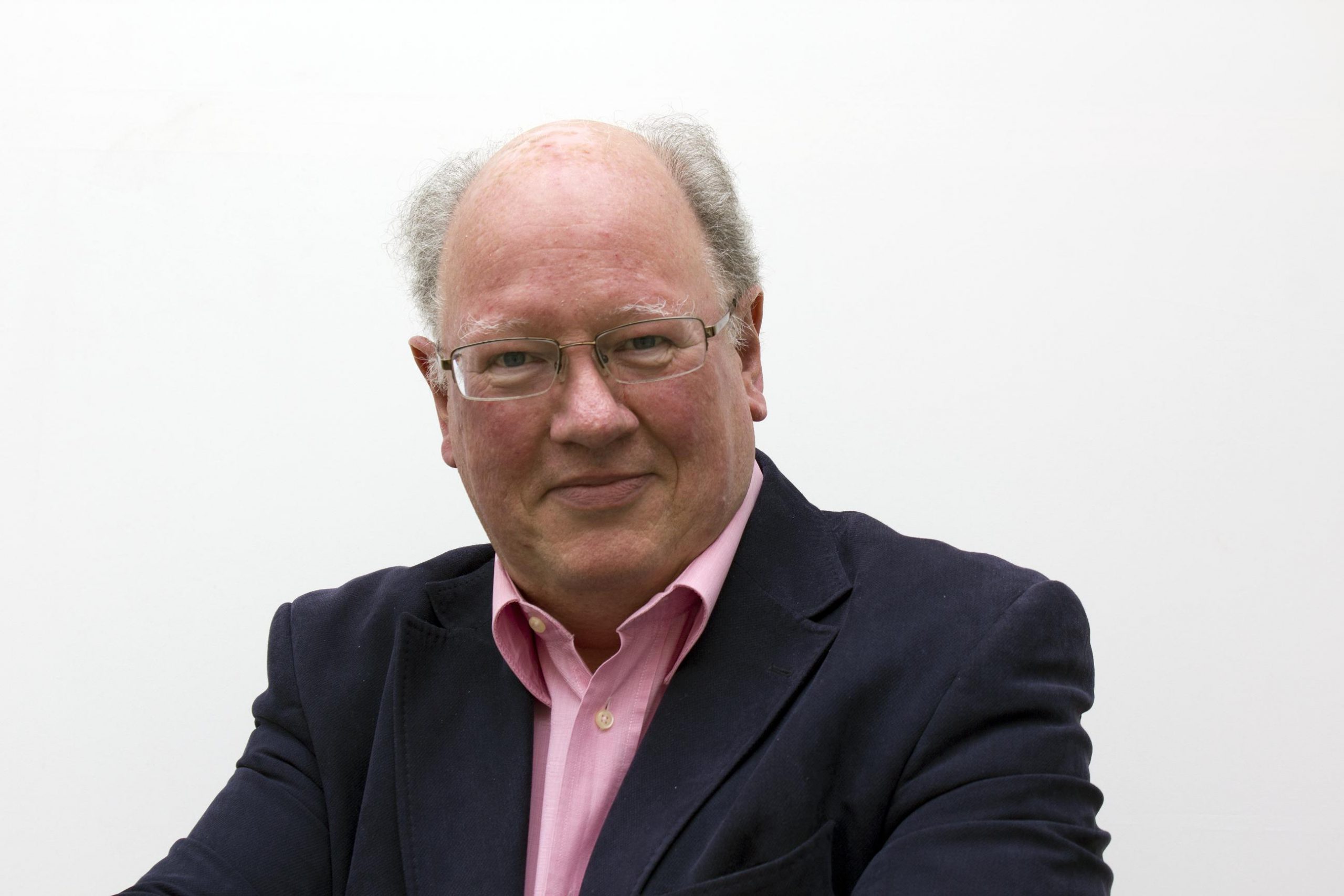 Simon Mundy is a writer presently living in Scotland. Mainly a poet, he has also written novels, plays, biographies and a lot of arts journalism.
He is Vice-President of the Writers for Peace Committee of PEN International and has advised on cultural policy all over the world for UNESCO and the Council of Europe. He was cofounder of the European Forum for the Arts and Heritage (now Culture Action Europe).

Sometimes the view is not enough,
The islands, the bobbing caps of early swimmers,
The ships lumbering past the headland
With its crest of concrete, its dance-hall
Gangsters, old libidos sunned on a shattered lido

Though the fishing boats with phallic prows
Come home late out of the mist trailing a flock
Of disappointed gulls screaming for warm guts,
Though the volley-ball girls
Have torsos tight enough for trampolines
Sometimes the view is not enough

Sometimes the view is not enough
For the men drowning off the breakwater,
Brisk yachts tacking snootily with idle crews,
For the garrison in a pointless fort, tourists
Posting look-out at the turret tops

When the under twenty-five’s stretch
Untouched on the sand, comatose and soft
Wearing only a scowl of discouragement,
And the ice has only melted in the warm gin
And the flowers wilt in virgin-hard beds
Sometimes the view is not enough

Sometimes the view is not enough
For the beauty driving the bus in the heat
Of the morning, the toddler and her mother
Over-dressed and catholically pregnant
As the dust rises from the pavement
And away from the deceptive sea
Between the mountains, black slopes
Muddled in the sunset and the vines
In their autumn coats of auburn,
Curling yellow, when you are as handy as the moon
Sometimes the view is not enough.

I wrote that poem in Marseille in 1998, I think. It’s a love poem, of course, but it also tries to give a verbal sense of the life of the port and the sea it serves – the view a painter or film maker might want to show.

Mediterranean: between the lands. The shores of the Mediterranean Sea have long been thought of as a cradle. In this protected space, large enough for extraordinary variety, small enough for easy travel, humans have mingled and exchanged, invented and discarded gods, learned to farm, fish and cook superbly. Wine and olives, architecture and spices, music and migrants have moved along and across, changing character and quality as they went. The people have fought a lot, of course, because it is in their nature to want to have an argument and settle it with a demonstration of power. At present there is only one dominant god more or less revered around the sea but that god is still surrounded by enough different rituals to be fought about. But the inhabitants have also in the good times been smart enough to share bright ideas, to look and admire, to discuss and refine.

These are not good times. The cradle of civilisation is showing signs of wet rot and mould. The shores no longer seem places of relief and discovery after a weary voyage but coasts of danger and detritus, insufferable heat, revolting pollution and constant anger. Until very recently I always dreamed of finding the resources to renounce northern Europe and settle myself on one of those shores. Now I am not so certain.

Is it possible that there is now less interaction around and across the Mediterranean than at any time since the Stone Age? I am in my mid sixties and in my lifetime empires have disintegrated, nations have been invented, amalgamated and separated again. Trade has found other routes. There is no need for caravans of exotic goods to plod from Asia to the Black Sea and Levantine coats, and then to be shipped to Venice and Valencia and on to inland Europe. They come by the container load around Africa to Rotterdam or through the Suez canal (if it is in one of its more secure phases).

Borders have closed, opened and closed once more depending on the whims of autocrats and political fashion. Tourism has blossomed (and then withered thanks to pestilence, terrorism or other politics) but that was mostly about northern Europeans going south. The peoples of the Med themselves rarely seem to explore next door’s hotels and beaches for pleasure and they are mostly rude about each other’s foodand wine, the envy of us northerners.

I worry for the coasts and islands of this magical sea. The failure of governance all along the southern side has left its people angry, poor and disaffected. War lords treat Africans from beyond the desert just as Arab traders always did: commodities to be exploited. These modern slavers do not sell the victims much (except among themselves). They strip them of possessions then threaten Europe with boats of the destitute. With those fleeing the turmoil and genocide of Syria, the spiritual descendents of the Ottomans use similar tactics against neighbours they used to rule over.

From Turkey to Egypt, both in the grip of despots, the Levant is fractured and increasingly impoverished. Nowhere along that whole eastern side is there an effective kindly government. There is a depressing choice between the weak and the vicious. I don’t need to spell out which is where. Those that have to put up with them know well enough. A list just leads to childish finger pointing by those who should be governing better, who have no credible right to the offices they occupy by force, corruption or disreputable election.

On the positive side, from Rhodes to Gibraltar there seems to be a lull in the surge of far right wing support that has often gripped most of the northern shore (with its history of fascism, entrenched and corrupt business often allied with nationalist religion). When I first visited Rhodes, as a student in 1973, there was no obvious airport. I arrived after two nights on an island-hopping ferry from Piraeus where Colonels were replacing constitutional monarchy with official military dictatorship. They looked across to Spain, which had had it for nearly forty years. Within two they were all gone, first from Portugal, then Greece and Spain. These things are cyclical, though, and divisions in the liberal left and moderate socialist camp usually mean that the more ruthless conservative interests cannot be kept at bay for long. We still see the pattern. As one country starts to see sense (Spain and Italy) another falls for an iconoclast (Slovenia). But a lull in repression – or at least a majority of countries with tolerably benign centrist governments – at least provides relief and the possibility of slow progress.

The disconnect between the nations with Mediterranean shore lines is now extreme and intensifying. For the first time in thousands of years it is impossible to circumnavigate the sea, calling at all its magnificent harbours, legally and safely. These days the old Venetian traders would have almost certainly had their cargoes confiscated or been locked up for breaking somebody’s embargo or visa restrictions. Imagine the route now. The ship’s crew would pass without too much hassle down the Adriatic, round the Pelopponese and into the Aegean. Turkey would be suspicious but probably let them through; but from Mersin to Latakia (Syria), on to Beirut (Lebanon), Haifa (Israel), Rafaa (Gaza), Alexandria (Egypt), Tripoli (Libya), Tunis, Algiers, Melilla (Spain) Tetouan (Morocco), Ceuta (Spain), Gibraltar (UK), Valencia (Spain) and on home? At best a bureaucratic nightmare involving a lot of ‘smoothing the way’ with cash – at worst the list of those wanting to sink or requisition the ship would be too long to risk.

That leaves the great islands of the sea in a strange position. Cyprus, Malta, Crete, Sardinia and Sicily are used to being the calling points for those traversing from one coast to another. Air travel links them easily to northern Europe but boat traffic from nearby harbours is no longer substantial. Take a look at the ports of origin of those dropping by and they will be either yachting playgrounds or tourist cruising pick-up points.

There will be few small tramp ships and non-local fishing boats, let alone regular ferries bringing friends for the weekend. These islands have always been pivotal: prised as outposts of empire or in their more independent years the freeports of pirates. Their cultures all reflect their neighbours’ urge to colonise while developing a fierce sense of not being creatures of the mainland.

I am an islander. I have always found in islands that precious mingling of self-containment with the realisation that they depend on food and materials brought to them across the water that is both their protector and their limiter. Islanders think very differently from continentals. Their lands don’t have borders or arbitrary boundaries that can be opened or closed by the vagaries of marching armies. They can shut off from the outside world but their seclusion is always tempered by the sense that outsiders are welcome, like migratory birds, as long as they bring colour and move on at the end of the season. Settlers can become islanders but they have to embrace the days when the sea is angry as well as those when it is pretty.

Could islands be important again, I wonder, in joining the shores of the Mediterranean without importing the obsessions of those vying for supremacy on the continents? Could they have the role Crete had when it became the bridge between Egypt and Mycenae, Sicily took successively between Greek and Carthaginian, Norman and Arab, Spanish and Italian?

Artists and performers cannot promise to change minds or political tides. They can propose, though, and through their presentations inspect and spotlight social shortcomings. They can represent contact winning out against separation, fondness over alienation. Look at this, they can say, imagine and think again.

I am going to take two verses of the old folk song O Waly Walyout of context as a prelude to such a proposal.

The water is wide, I cannot get o’er,
And neither have I wings to fly.
Give me a boat that will carry two,
And both shall row, my love and I.

A ship there is, and she sails the seas,
She’s laden deep, as deep can be,
But not so deep as the love I’m in;
I know not if I sink or swim.

Those words seem so apt for the contemporary Mediterranean; especially its migrants and refugees but also, more symbolically, its floundering faiths and politics.

Perhaps a boat is the answer, or the start of an answer. A ship I want, to sail that sea, stopping often, opening it’s stern doors and lowering its ramp onto the beach – where the people of that place will sit and watch as they are brought work that has been seen on the last stop and will be on the next one too. They will be shown film of how the other audiences have reacted as the show plays out before them. Performers from the various ports of call will join the ship’s company and, like shellfish on the hull, add new layers of persuasion as the voyage progresses.

We will call at both cities called Tripoli and Valetta in between. We will join local festivals. We will invade Gaza with music, Carthage with Dido’s return, unite the Veneto, Istria, Dalmatia and Acarnania, Nafplion with Ephesus, Catania with Tangier. We will be expensive but so much cheaper than guards, naval patrols and the purveyors of fear.